Variants module is the solution that allows you to define different finished or semi-finished products based on a shared and modified BoM, by applying the proper changes.

A variant is a version of BoM, from which it is distinguished by adding, deleting or editing in one or more components.

The Mago4 Variants module is perfect to correctly set and manage the BoM variants. Specifically the module allows you to:

Mago4 Variants module operates in association with BoM in a simple and intuitive way: to create a new item, you only need to specify variations to be made to a specific BoM.

Mago4 Variants allow you to produce and manage similar inventory items based on a single BoM that groups shared parts. In this way you optimize production processes and timing, managing only the particularities that differentiate each item.

Variants can be managed in two ways:

It is convenient to indicate the same Item Code of varied BoM when the set modifications do not vary the cost of the finished product and when the quantities that define theoretic availability do not need to be known for each variant.

Mago4 Variants module can manage the input and output quantities from any storage for each variant. This module – even if it’s not managing all the typical fiscal information in the Items master – can also adapt to your business situation thanks to its flexibility.
For example, if the variant is a simple application of a different brand to the same item according to the purchaser’s need, you can choose to manage in inventory a single item that corresponds to the BoM.
Instead, if you manage various item models, you’ll better have one item per variant, linked to the BoM anyway.

Thanks to a fast and intuitive procedure, it is really simple to change component quantities or codes in a BoM.
Variations can be:

When editing an original BoM, you can check the structure of a new BoM at the end of variations. After modifications, the added, deleted or edited components of BOM are indicated, in order to give you an overview of the difference compared to the original version.

Since manually itemizing a variant in some cases can be difficult, copying and editing an existent variant can be useful and handy. You can therefore add, edit or delete rows, without compromising the original variant.

When saving a variant, Mago4 automatically checks the BoM consistency; in other words, it checks for discrepancies making sure that:

The various procedures have functions to manage the variants.

This procedure allows you to expand all the components of a bill of materials or a variant, representing them graphically, in order to have an overview of all variations made to the selected original BoM. For semi-finished products it is also indicated the code of the connected variant.

Procedures such as explosion or BoM costing allow you to choose whether to consider the variants as well. You can choose to exclude variants, extract all or select them using special parameters.

In the BoM explosion procedure, Mago4 usually takes into account all the associated variants. You can expand BoM and items with variants together or choose not to expand any BoM, but just visualize the items with the indicated variants.

During the BoM costing procedure, Mago4 evaluates the cost of a bill of materials, considering all the associated variants.

When you launch an item in production with the indicated variant, it is possible to indicate the variant in the Production Plan or directly in the rows of Production Launch and Return windows.

At the end of production, you can check the inventory situation of the produced item variants in the proper tab.
Mago4 does not manage the quantities that define theoretic availability for variants, but saves the quantities loaded and unloaded from the various storages.

The sold article variant must be included when entering a sales document. Mago4 streamlines also this process. If items are always sold to a certain customer in a specific variant (for example, if the variant is the brand), you can enter the variant code in the Customer’s Master Data so that it is automatically suggested in the rows of sales documents issued to that customer.

Mago4 manages the variants perfectly also with Basic and Advanced Manufacturing modules. In fact you can indicate them both in Manufacturing Order and in outsourcing documents, while with Manufacturing Planning you can manage item variants through MRP procedure. 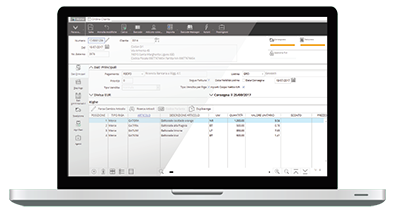 Mago4 is available in 3 Editions
to meet the real needs of all SMEs.
The Variants module is available for Professional and Enterprise Full Editions.

You can install a demo version and try it out in your company; you will be provided with all the support for the implementation of your new ERP.

Discover the most suitable partnership proposal for your company; become a Partner of the leading Italian group in the software and services sector.